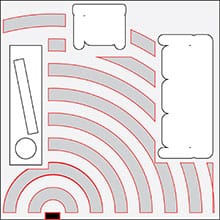 The main purpose of motion detection is to sense an intruder and send an alert to your control panel, which alerts your monitoring center. Sensors work when you are not home, or when you tell the system you are not there. Some security systems can be programmed to record events via a security camera when motion is detected.

Motion sensors stand guard, ready to react to various situations, such as movement in your living room, windows or doors being opened or closed, or a broken window.
Motion sensors can:

Detects body heat (infrared energy). Passive infrared sensors are the most widely used motion in home security systems. When your system is armed, your motion sensors are activated. Once the sensor warms up, it can detect heat and movement in the surrounding areas, creating a protective "grid." If a moving object blocks too many grid zones and the infrared energy levels change rapidly, the sensors are tripped.

Sends out microwave pulses and measures the reflection off a moving object. They cover a larger area than infrared sensors, but they are vulnerable to electrical interference and are more expensive.

Motion sensors can have combined features in an attempt to reduce false alarms. For example, a passive infrared (PIR) sensor could be combined with a microwave sensor. Since each operates in different areas of the spectrum, and one is passive and one is active, Dual Technology motion sensors are not as likely as other types to cause false alarms, because in order for the alarm to be triggered, both sensors have to be tripped. However, this does not mean that they never cause false alarms.

Emits infrared rays from an LED. Using the reflection of those rays, the sensor measures the distance to the person or object and detects if the object is within the designated area.

Sends out pulses of ultrasonic waves and measures the reflection off a moving object.

Detects vibration. These can be purchased or easily made at home. A homemade vibration sensor uses a small mass on a lever, which is activated by a switch to an alarm when it vibrates. Homemade motion sensors can work, but they can also be unreliable.

Question:- Draw and explain interfacing of motion detector with 8051 microcontroller, if motion or moving object is detected then LED should be turn ON which is interfaced to pin P2.0

ALP for the interfacing